How would you like to Live the Dream of running out alongside a Club Legend and taking part in a 90 minute match on your team’s hallowed turf?

Since forming in 2001, Football Aid have allowed over 14,000 football fans the chance to Live the Dream in more than 535 charity football matches all over the UK, and over £2M has been paid out or designated as payable to charities in the 13 years since.

The unique concept was the brainchild of businessman and Football Aid Chairman, Craig Paterson.

Funds raised from our events always benefit the work of a charitable project nominated by our partner clubs, as well as projects nominated by Football Aid’s parent charity Field of Dreams.

Arsenal: Roy Talbot, the 68 year old former Sunday League player from Welwyn Garden City who hung up his boots for the last time, making his final appearance between the sticks at The Emirates for Arsenal in 2011. Roy was lucky enough to have his grandson as mascot as well.

Blackburn Rovers: Eric Lamb, a Melbourne, Australia based fireman makes the 10,500 miles pilgrimage to play for his hometown club Blackburn Rovers most years. He even scored with a stunning 30 yard strike that flew into the top corner & made our Goal of the Season 2011 shortlist.

Bolton Wanderers: Maurice Lawson continues to trot out at The Reebok most years; he’s our eldest player at the tender age of 70 years young! 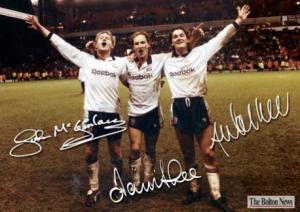 Bolton Wanderers: Howard Fox flew all the way from Australia to play in goal at Bolton Wanderers in 2009 – he was rewarded for his efforts with the Man of the Match award!

Celtic: David and Paul Walker Lived the Dream in unique style at Celtic Park in 2007, playing with their other Brother, former pro Andy, who starred as a Striker for Celtic, Bolton & Scotland! 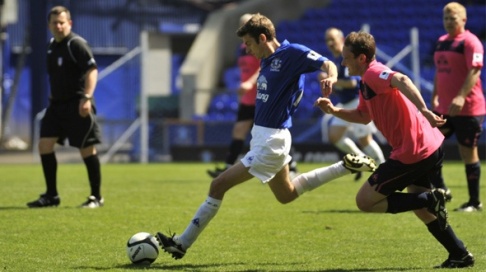 Everton: Father and Son Dave and Mike O’Reilly, originally from Liverpool, who have flown over from Orange County, California to play together at Goodison Park 3 years running from 2010-2012. This year their impressive Away team won 8-3!

Liverpool: Nick Carter, a Liverpool fan from Carmarthen, Wales returned from a tour of duty in Afghanistan only days before the 2011 game to play alongside his boyhood hero John Barnes at Anfield.

Liverpool: Liverpool fan Paul Hewson played in a match at Anfield in 2013 and recounted his experience after the event:

“You’ve all seen it on telly, maybe lucky enough to see it from the stands but until you have experienced walking down the famous tunnel, touching the “This is Anfield” sign and walking out onto the pitch as a player, only then will you ever come close to the feeling the players get when they play their first game on Anfield [turf].”

Manchester City: Diego Ponzé, a Milan, Italy based Sky Sport 24 journalist, flew over with his own cameraman to film a video diary of his experience in 2011. The 8 min video diary was shown on Italian TV and featured an impromptu interview with former City legend and Football Aid Patron Denis Law!

Manchester United: A group of 9 x Italian players celebrated their Stag Party or “Addio Al Celibato” in style by playing together for Manchester United at Old Trafford in 2012.

Tottenham Hotspur: Three London born brothers, Chris, Paul and Matthew Shelley who all played together at White Hart Lane for the 2nd time in 2011 and had the privilege of being managed by Spurs great Ossie Ardiles as well!

Football Aid is back for another season, and you can experience a matchday in the same way as your heroes do every week, in a way that even a club tour can’t match, plus do your bit for charity.

Players gain exclusive access to the pitch and tunnel areas, pull on their own personalised shirt in the official changing rooms, walk down the tunnel to the sound of a cheering crowd and step out onto the hallowed turf, before taking part in a never to be forgotten 90 minute game of football!

To secure your place in a 2014 team, visit www.footballaid.com and register.